…then you’ll love East of Eden.

As is probably quite evident, I like connections.  The best thing in the world to me is drawing lines between books and movies and music and people.  It’s why I wrote this post about Edgar Allan Poe references in Mayday Parade songs.  Seeing where different expressions of art intersect is just wonderful.

Well, East of Eden is by John Steinbeck, and Steinbeck is Marcus Mumford’s favorite author (proof here).  Once you realize this, it’s easy to see traces of the novel throughout his lyrics.  For those of you not familiar with East of Eden, I’ll sum it up for you: Cain and Abel.  That’s pretty much what the entire book is about—various versions of the Cain and Abel story from Genesis.  The title itself comes from Genesis 4:16, “So Cain went out from the Lord’s presence and lived in the land of Nod, east of Eden.”  It’s a fantastic read, one of my all-time favorite classics. 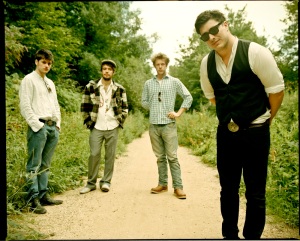 Now that you know Mumford loves Steinbeck, and Steinbeck loves Cain/Abel, the connections become even more apparent.  Take “Hopeless Wanderer” for instance.  (Listen here).  It’s probably the most straightforward Cain and Abel song Mumford has…Even those who haven’t read East of Eden can see the obvious Genesis references in this song told from Cain’s perspective:

So that’s pretty clear.  But even other Mumford songs reference Genesis and East of Eden.  “Dust Bowl Dance,” for one, is a nod to Steinbeck, who sets all his novels in the American Dust Bowl era.  (Listen here).

But the song with the most lovely allusion to East of Eden by far is “Timshel.” In fact, the entire song doesn’t make much sense unless you know something of the novel and Biblical story to which it refers.  There are a few bits of evidence of the Cain/Abel story here and there, such as the line that says, “As brothers we will stand,” but for the most part, the song is kind of confusing. What does the word “timshel” even mean?

Well, East of Eden answers that for us.  It’s a bit of a lengthy explanation, but hang in there.  If you’re a Mumford fan and a fan of “Timshel,” you want to hear this…  (And I bolded the phrases that are found in the song, practically verbatim).

One of the wisest characters in the novel, Lee, is discussing Genesis 4, the story of Cain and Abel:

“‘I compared the translations we have—and they were fairly close.  There was only one place that bothered me.  The King James version says this—it is when Jehovah has asked Cain why he is angry.  Jehovah says, ‘If thou doest well, shalt thou not be accepted? and if thou doest not well, sin lieth at the door.  And unto thee shall be his desire, and thou shalt rule over him.’  It was the ‘thou shalt’ that struck me, because it was a promise that Cain would conquer sin…’ 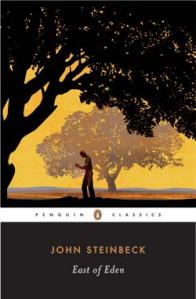 Lee sipped his coffee.  ‘Then I got a copy of the American Standard Bible.  It was very new then.  And it was different in this passage.  It says, ‘Do thou rule over him.’ Now this is very different.  This is not a promise, it is an order.  And I began to stew about it.  I wondered what the original word of the original writer had been that these very different translations could be made…

The American Standard translation orders men to triumph over sin, and you can call sin ignorance.  The King James translation makes a promise in ‘Thou shalt,’ meaning that men will surely triumph over sin.  But the Hebrew word, the word timshel—‘Thou mayest’— that gives a choice.  It might be the most important word in the world.  That says the way is open. That throws it right back on a man.  For if ‘Thou mayest’—it is also true that ‘Thou mayest not.’  Don’t you see?…

There are many millions in their sects and churches who feel the order, ‘Do thou,’ and throw their weight into obedience.  And there are millions more who feel predestination in ‘Thou shalt.’  Nothing they may do can interfere with what will be.  But ‘Thou mayest’!  Why, that makes a man great, that gives him stature with the gods, for in his weakness and his filth and his murder of his brother he has still the great choice.  He can choose his course and fight it through and win.’  Lee’s voice was a chant of triumph.

‘It is easy out of laziness, out of weakness, to throw oneself into the lap of deity, saying, ‘I couldn’t help it; the way was set.’  But think of the glory of the choice!  That makes a man a man.  A cat has no choice, a bee must make honey.  There’s no godliness there…

But this—this is a ladder to climb to the stars.’  Lee’s eyes shone.  ‘You can never lose that.  It cuts the feet from under weakness and cowardliness and laziness.

And I feel that a man is a very important thing—maybe more important than a star.  This is not theology.  I have no bent toward gods.  But I have a new love for that glittering instrument, the human soul.  It is a lovely and unique thing in the universe.  It is always attacked and never destroyed—because ‘Thou mayest.’'”

Isn’t that just beautiful?  It’s a wonderful explanation of Genesis, “Timshel,” and mankind.  It puts the song in a whole new light.

So if you like Mumford & Sons, you should read East of Eden.  The above is just a snippet of all the wonderful connections you’ll be able to make.
(You can listen to “Timshel” with lyrics here.)

Tell me what you think! Cancel reply